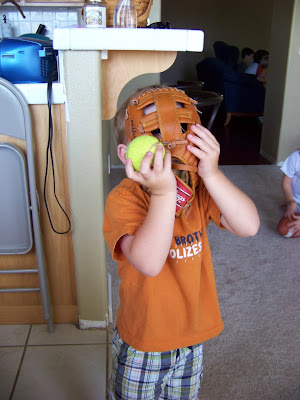 I found the current edition of Aaron Sturgill as a child----his son, Ryan. This morning, at breakfast, Ryan informed me that he hates kissing. I told him that I was going to give Uncle Gary a very big kiss. He put the glove over his face. 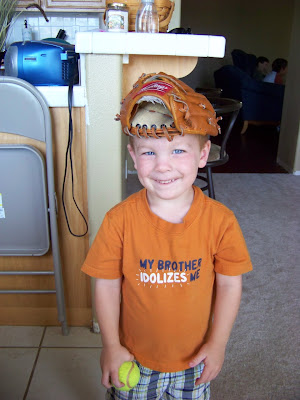 Then, Ryan (age 3 1/2) informed me that he has a girlfriend. The following were various parts of our dialogue: "Her name is Bekah. She is 6 years old." He likes the mature, older ladies. "She is Alex's girlfriend." Wait, I thought she was your girlfriend. The glove went back over his face. "I don't have a girlfriend now." The crisis and love triangles that are formed at this young age. I told him I would be his girlfriend. "No, you kiss Uncle Gary." I guess he doesn't want their to be a rivalvry.

I do have many pictures from my brother and his family's visit, but this one just begged for its own post!
Posted by The Beard Bunch at 10:00 AM

I can see why you didn't want to wait to post those photos. Too cute. Ryan does look like Aaron. I'm just wonderning about his t-shirt..."My brother idolizes me." Since brother is singular, which brother idolizes him? Maybe both?

That is toooooo cute, Michelle. I look forward to seeing the rest of the pictures. I think that is one of the shirts I got for the boys! Love to you all, Mom

He probably gets that from Aaron. I'm pretty sure he and Linda are smooching all the time, and the kids just like, "Stop! Stop!" I always told my parents to "Get a room" when they'd kiss in front of me!

Thanks for the great photos - if it wasn't for you, we'd NEVER know what Aaron's kids look like (hint, hint, Aaron!).

Michelle, Just touching base with you. Would love to get your email along with Aaron and Michael's. Thanks.