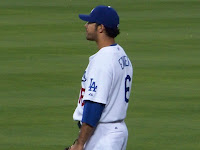 We have lived in southern CA for 3 1/2 years, and yet we had not been to a Dodger game. Gary and I promised the boys that we would go to a game this summer. There was a group from our church going on Friday night, so we joined them at Dodger stadium. The player to the left is Gary's "new favorite" player. 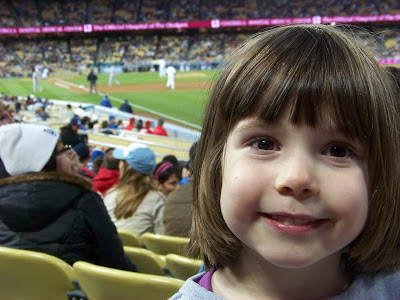 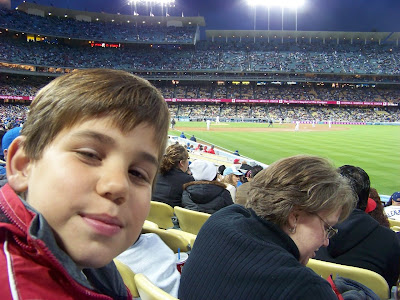 When we first got to the game, Wesley said, "I can see it better on the TV at home." Gary told him we came for the atmosphere. Wesley did enjoy the atmosphere, particularly the beach balls. 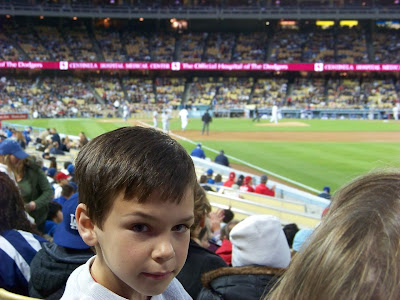 Andrew made a game out of seeing what a doofus he could be. When the wave came around (8-10 times), he refused to stand up and just put his coat over his head. Then when it was passed, he would stand up and wave. He liked to sit with his hat entirely over his head (he didn't think we knew he could see through it).

It was a good evening! Let me explain the suspense: The Dodgers were down 2-1 and it was the bottom of the ninth inning, and..............it started pouring rain. We stood there, uncovered, in the pouring rain for one hit. When they called a postponement, we all ran to the covered parts of the stadium. Eventually, we left. The kids were disappointed that we did not get to see the whole game. I was disappointed that we did not get to see the fireworks. Nevertheless, it was a fun evening, and how many times a year do you find yourself with your family and some friends standing out in the pouring rain and actually laughing?? :)
Posted by The Beard Bunch at 9:50 AM

I'm glad you had SUCH a good time. I, uh, am not a sports fan per se (more of a sports un-fan) but it's the family and friends time that really count. I love the photo of B! She's so cute, Michelle!

What fun..at least until it started to rain.

The only sport I really enjoy is football. But it looks like eveyone had fun.

P.S. I could not attend any sport event like this one because of my phobia of heights! I'm just one crazy Aunt.

Sounds like you guys had such a fun time....those are great memories for the kids (and the rain just topped it off!)