I live in a battle zone 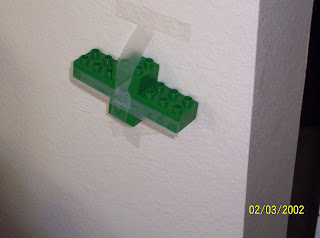 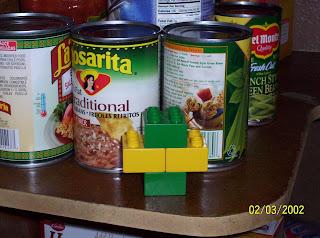 We have really been going through scotch tape lately. I recently discovered why.
Reason #1: Brooke likes to put "band-aids" on all her babies.
Reason #2: As you can see above, Wesley likes to tape his army guy equipment to the wall.
Today, Wesley and Andrew have strategically placed laser targets, missiles, and bombs all over the house. No matter where I go in the kitchen, I am in jeopardy of being blown to pieces. Oh my!
On another note, Gary and Wesley played their first 18 holes of golf together yesterday. It was a beautiful Friday afternoon, and they stayed out until it got dark. Gary said he was impressed when Wesley shot a 6 on the first hole (a par 5). Good job, Wesley! Gary gave Wesley the goal of trying to shoot double par---which means on a par 35 on the front nine, Wesley was going to try to get a 70. He scored 67. I asked Wesley if he learned anything, knowing that Gary's natural instinct would be to give him lessons on each tee; however, Gary quickly replied, "No, we just went out to have fun." And that they did!
Posted by The Beard Bunch at 2:12 PM

What a fun father/son time! Great job, Wesley!!! Michael and I went out on a double date about a month ago and we went golfing....well, the girls were the cart drivers while the guys golfed. I think I blew my chance to ever go again :) Michael couldn't concentrate because I kept talking. He would just smile at me and tell me to drive to his ball. How boring....a sport that you can't talk in!!! If he ever lets me go again, I think I'll bring a book :)

Go out and win one for the Gipper, Michelle! Keep an eye out for those sneak attacks - and "bombs" away!