Several months ago, Andrew got kicked in the mouth (I did post a picture and comment on that event). Since that time, he has had one loose tooth in the top front of his mouth. To make matters uglier, it was crooked. I often would tease him that I was just going to pull it out. In fact, I told him "if it was not out by St. Patrick's Day, I was going to pull it out." We tried, but it did not want to come yet. Well, it is much later than St. Patrick's Day, and I am happy to say, we finally got rid of that tooth!!!! He woke up this morning with blood on his pillow. When he came downstairs for breakfast, Wesley told him that his tooth had "stuff on it." It wasn't food, either. I cleaned the blood off of his tooth, and then told him, as usual, that I was going to pull it out. Except this time, I did, and it came! Andrew tells me that this tooth is worth at least $5.00. We will see what the tooth fairy does about that :) 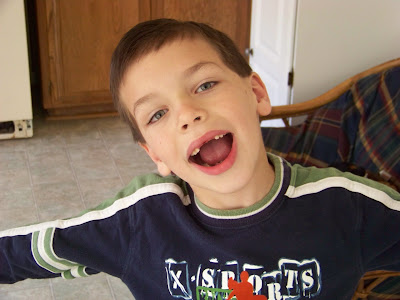 Yep, $5 sounds good to me, too....as long as you are the one paying it (don't tell my kids that the tooth fairy in CA is richer than the one in MO!!)

I think that tooth is at least worth $10. I love when the front 2 teeth are gone so cute!

Just my opinion, but Andrew has some Rehfeldt "looks" to him. As his mom, what do you think?